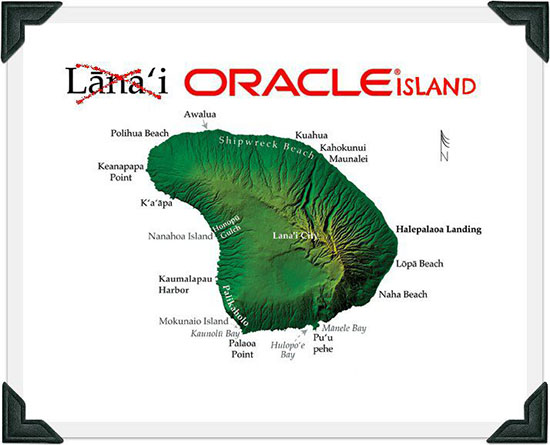 Abercrombie says Ellison has had a longstanding interest in the island.

Lanai is Hawaii's smallest publicly accessible inhabited island, with some 3,200 residents. It attracted more than 26,000 visitors from January through April this year.

Oracle is a software company based in Redwood City, Calif.

THIS IS A BREAKING NEWS UPDATE. Check back soon for further information. AP's earlier story is below.

There are mixed emotions among those who live on Lanai, the small Hawaiian island that could be sold soon.

Billionaire owner David Murdock has a potential buyer for Lanai, and the island could be sold in the coming days, said Maui County Mayor Alan Arakawa. Murdock owns about 98 percent of the island.

Murdock has clashed with some residents who oppose his company's windmill project that would deliver power via undersea cable to Oahu. Some community group leaders told the Maui News (http://bit.ly/MsP87j) they hope the new owners will nix the project, proposed for about as many as 12,800 acres on the northwestern part of the island.

The site of the project is a "garden of gods," with views of Maui and Molokai across the channels that shouldn't be ruined, said Robin Kaye of Friends of Lanai, which formed to oppose the wind farm.

"As a result of the wind project, the community has been real tense," said Butch Gima, president of Lanaians for Sensible Growth. "Within families they are having to choose sides."

International Longshore and Warehouse Union Local 142 supports the project. William Kennison, union Maui division director, said the union has been kept in the loop about the sale and that he knows who the undisclosed buyer is.

"They are assuring us that whoever purchases the island will maintain the union contracts," he said.

Rumors and concern are swirling among the island's estimated 3,200 residents, said Lanai Councilmember Riki Hokama. He said he hopes the new union is a good steward: "There are still great opportunities for the island."

Email ThisBlogThis!Share to TwitterShare to FacebookShare to Pinterest
Labels: All posts, Culture