Our friends at Golf Stinks decided to take a trip to the Islands, here's what they had to say about their visit... 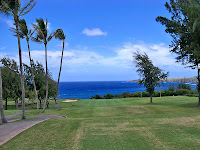 You may recall I had planned a trip to Hawaii (specifically Maui) for this April. We had finalized the trip rather late in the game (just two months prior to departure) and it took till the week before for me to realize I was about to embark on a journey to paradise.

But once reality set in, I was excited: We had booked tickets to a luau; bought passage on a whale watching boat where we could also snorkel; planned quality time loafing on the beach; and I had set aside a few hours to sneak in a round of golf.

But this wasn't going to be just any round of golf - no sir. I had a tee-time booked at Kapalua. The resort community features two legendary golf courses (one is host to the PGA Tour's Hyundai Tournament of Champions) and both are designed by one legendary golfer - Arnold Palmer.

Let me begin by saying Maui is gorgeous. It's truly a heavenly landscape, complete with sun-drenched palms and misty mountains - visions that have a way of relaxing every bone in your body just by being aware of your surroundings. 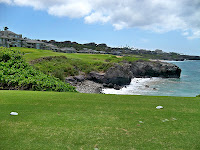 But Kapalua kicks it up a notch. Set between the mountains and the ocean, there are views that will leave you breathless - not only of the palm tree-litterd coastline, but of the course itself. For example, the par 3, 5th hole on The Bay Course (see photo at right) requires sailing your tee shot over the crashing surf, past a stretch of calicheand onto a green flanked by three traps.

Beyond the views, the course is immaculate. Despite the tee-boxes and greens having recently been aerated (which you can tell in the photos), the ball still rolled true and steady. The fairways were cut to perfection, while the rough was tough, but not impossible.

Before my round, I spoke a bit to the Sales and Marketing Manager, Dustin Irwin. With management of the courses recently transferred to Troon Golf, Dustin was excited about the upgrades being made. For example, all the carts are new and electric - complete with a built-in cooler for your preferred beverage and a state-of-the-art GPS system where each hole features its own video fly-over! And of course, Kapalua is doing its part to conserve - water is rationed and reused and environmental areas maintained and protected.

If you're like me and only end up playing one round in Hawaii, there's no need to lug your clubs along - Kapalua is stocked with complete sets of clubs from Titleist (I actually may have been sold on that 910D2 driver - was hitting the tar out of it).

The round took just 3.5 hours. Typically, when you play at that pace, it's on a course you know well. At Kapalua, I took time to snap some photos (as can be seen in this post) and enjoy myself. Yet the group behind us was always a good hole back, and I don't remember seeing anyone ahead of us. Perhaps it was the time of year, but I felt relaxed and comfortable the entire time.

We capped off the day in Kapalua's Pineapple Grill restaurant, where I soaked in wonderful course views on the patio while sipping on a deliciously strong Mai Tai. And if the fish and chips I ordered were any indication, both the Pineapple Grill's libations and food are well-worth a post-round visit.

Overall, Kapalua is awesome and deserving of a round if you're visiting Maui. While the Ritz-Carlton is on the premises, we stayed about 30 minutes south in the cute little touristy town of Lahaina (nothing against the Ritz, but it's a little too ritzy for my blood).

Speaking of costs, neither course at Kapalua is cheap: The Bay Course is right around $200, while The Plantation Course is just under $300. But twilight rates begin at 1PM - where not just the greens-fees drop considerably, but so does the price of club rentals. And further discounts can be had should you decide to stay at the Ritz.

Bottom line: Maui was fantastic: I throughly enjoyed myself at the Luau; experienced some of the best snorkeling around; got to spy a mom and calf whale in the Pacific (though half of my boat was sea sick by that time); and played one of the top golf courses in the world. If you ever have the chance to visit, don't pass it up - it truly is a paradise.

The wildly popular "Golf Stinks" blog (which launched in 2009) features articles that don't really discuss the PGA Tour, but rather provide content a true weekend hack could appreciate.  Their 'lighter side' look at the golf industry is both entertaining, informative and often good for a laugh.
Posted by Scott Stevens

Email ThisBlogThis!Share to TwitterShare to FacebookShare to Pinterest
Labels: All posts