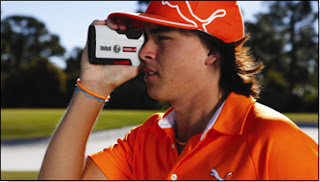 Overland Park, KS, March 5, 2013 – Bushnell Golf, makers of the #1 Laser Rangefinder on the PGA Tour for more than a decade, announced today a two-year sponsorship extension with PGA Tour player Rickie Fowler. One of the most dynamic young players in professional golf, Fowler will highlight the full range of Bushnell Golf products in print and broadcast advertising worldwide.

Fowler claimed his first tournament win as a professional, the Kolon Korea Open on the OneAsia Tour, rolling to a six-stroke win at Woo Jeong Hills CC in October 2011. He captured his first PGA Tour victory in May 2012 in dramatic style, carding a birdie on the first extra hole to defeat Rory McIlroy and D.A. Points at the Wells Fargo Championship for his first TOUR win.

“We’re delighted to continue our relationship with Rickie as he works toward his goal of winning a Major Championship,” said Phil Gyori, Executive Vice President of Marketing for Bushnell. “Rickie has been a great representative of the Bushnell brand, showcasing precision shots and accuracy week in and week out. He has accomplished great things in just a few short years on Tour, and we know that he’s going to continue to be successful for years to come.”

In addition to using Bushnell’s laser rangefinders during practice rounds while preparing for tournaments, Fowler will also represent Bushnell in various marketing, advertising and promotional efforts. Additionally, Fowler’s caddy Joe Skovron will wear the Bushnell Golf logo on his sleeve during tournament play at all Tour stops.

Bushnell, the #1 choice of professional golfers, offers a full range of rangefinders, which continue to change and improve the way golfers assess distances, ultimately improving performance.

For more information on the Bushnell family of rangefinders, visit the company’s website at www.bushnellgolf.com.
Posted by Scott Stevens