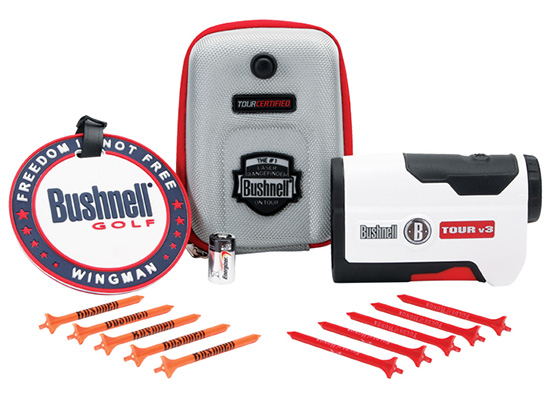 Overland Park, KS, February 15, 2013 – Bushnell Outdoor Products, makers of the No. 1 Laser Rangefinder on the PGA Tour for more than a decade, has announced its 2012 contribution to the Folds of Honor Foundation will total $145,000. Since establishing a partnership in 2010, Bushnell has contributed more than $450,000 to the foundation, supporting the spouses and children of disabled or fallen soldiers.

In an effort to continue its support of the Folds of Honor Foundation (FHF), Bushnell will make two new Patriot Packs available in 2013 featuring the Tour v3 and Tour v3 Slope. A percentage of every 2013 sale of the Bushnell Patriot Packs will be provided to the foundation’s fundraising efforts. The all-new Patriot Packs come equipped with a Tour v3 or Tour v3 Slope, Bushnell and FHF bag tag, new Bushnell productive carrying case and exclusive Bushnell Golf and FHF branded golf tees at a manufacturer’s suggested retail price (MSRP) of $299 (Tour v3) and $399 (Tour v3 Slope).

“Bushnell continues to be an incredible partner that is willing to put its money and marketing support behind ensuring that no family gets left behind when it comes to education," said Major Dan Rooney, the Folds of Honor Foundation president and founder. "Thanks to the generosity from partners like Bushnell, we have now awarded more than 3,800 scholarships to deserving families," added Rooney.

Founded by Major Dan Rooney in 2007, the Folds of Honor Foundation provides educational scholarships to the spouses and children of service members disabled or killed during U.S. military service. Major Rooney, a former F-16 pilot who served three tours in Iraq, founded Folds of Honor Foundation to ensure that families of fallen service are never left behind on the field of battle.

Email ThisBlogThis!Share to TwitterShare to FacebookShare to Pinterest
Labels: All posts, Product Reviews