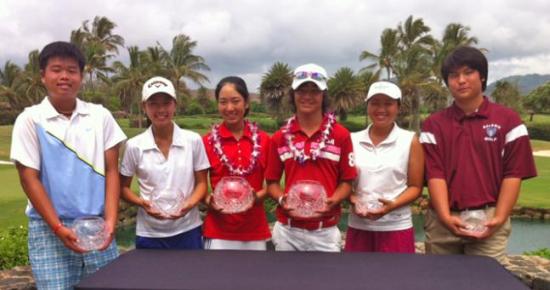 As I get older and my golf game starts to decline, it's encouraging to see the next generation of golfers starting to take shape.  Last weekend the Hawaii State Junior Golf Association (HSJGA) conducted the final round of the 2012 Mixed Team Championship at Poipu Bay Golf Course. The team of Hana Furuichi and Kengo Aoshima finished in first place with a total score of 139. Second went to Aiko Leong and Shawn Lu (142) and third, Ciera Min and Tyler Munetake (146)

Keep it on the short grass, but more importantly, have fun out there!
Posted by Unknown

Email ThisBlogThis!Share to TwitterShare to FacebookShare to Pinterest
Labels: All posts, Events, Kauai