Villegas Disqualified from the Tournament of Champions 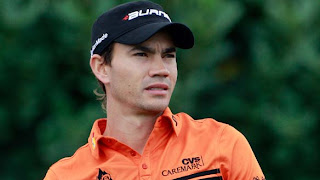 KAPALUA, Hawaii, Jan 7 (Reuters) - Camilo Villegas’s 29th birthday celebrations turned sour on Friday when he was disqualified from the PGA Tour’s Tournament of Champions for a rules violation spotted by a television viewer.

The Colombian had carded a one-under-par 72 in Thursday’s opening round, but he unwittingly violated Rule 23-1 at the par-five 15th where he twice chipped up to the green only to watch as his ball rolled back to him.

On the second occasion, he illegally flicked away a loose divot of grass as the ball was trickling back down the slope.
“I got word of this last night … and I just couldn’t do anything at that point in time,” Slugger White, the PGA Tour’s vice president of rules and competition, said in a statement.
“So this morning, I came in, I looked at the tape … and it was pretty obvious what happened.”
Rule 23-1 states: “When a ball is in motion, a loose impediment that might influence the movement of the ball must not be removed.”

Villegas should have incurred a two-shot penalty for his infraction. Instead, he completed his round and was therefore disqualified from the PGA Tour’s season-opening event for signing an incorrect scorecard.
“I went to him before I made any formal announcement, and he said he’d like to see it just to learn,” White said. “I told him what happened. He could not have been bigger. Obviously he wasn’t trying to do anything (illegal). He just didn’t know.”

After viewing the tape with White, Villegas agreed his infraction was clear-cut.
“While it is obviously a disappointing way to start the season, the rules are the rules,” the Colombian added. “When something like this happens, it’s important to me that you’re respectful of the game and the people involved.”

Villegas had booked his place in the elite, winners-only field at the Kapalua Resort with victory at last year’s Honda Classic.

His early exit from the limited-field event follows the withdrawal on Thursday of twice defending champion Geoff Ogilvy who pulled out before the start of the first round because of a badly cut right index finger.

Here's a look at the infraction: