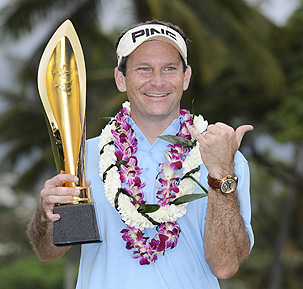 HONOLULU (AP) -- Mark Wilson barely had time to eat a sandwich, much less keep track of his round, when he arrived at the 17th green Sunday afternoon at the Sony Open and realized he had not made a single bogey during this 36-hole marathon.

His four-shot lead had dwindled to a stroke. Wilson was staring at a 12-foot par putt, and the closing hole was a par 5 that he had not been able to reach all week.
The thought was fleeting. The way his week had gone, the outcome was predictable.

"I thought about that before I hit the putt," Wilson said. "I haven't made a bogey all day, so why start now? It entered my mind, but when I was over the putt, I didn't think about it."

The putt curled in the side, and Wilson started his season with a win to earn his first trip to the Masters.
Wilson shot a 5-under 65 in the morning to take a one-shot lead into the afternoon round. With six minutes between rounds -- enough time to get a chicken sandwich and a fresh box of golf balls from his locker -- he closed with a 3-under 67 and held off late runs by Tim Clark and Steve Marino on different sides of Waialae.
Wilson's last trip to Augusta National was 2001 -- as a spectator.

"I get goose bumps thinking about it," he said.

He nearly got chills watching Marino give himself one last chance with a remarkable shot. Clark had already finished with a 64 and was on the practice range at 14-under par. Marino was 13 under and needed an eagle, which looked improbable when his drive splashed out of the bunker and onto the side of a hill.
With his feet in the sand, and the ball about chest-high on the hill, Marino lashed at it with a fairway metal and watched it hook onto the front of the green and stop 40 feet away.
"I saw the ball, and I thought, 'OK, eagle is going to be pretty tough for him to make.' It was one incredible shot," Wilson said.

Marino's eagle putt narrowly missed, and Wilson pitched to 4 feet and made a birdie he didn't need. He finished at 16-under 264 and earned $990,000 for his third career victory.
Clark, who started the final round five shots behind, birdied three of his last four holes. He had a 10-foot birdie putt on No. 8 slide by on the left, and he narrowly missed a 15-foot eagle putt on the last hole.
"It's a relief to get it in," Wilson said. "I'm just thrilled to be the champion."

Wilson played his final 40 holes at Waialae without a bogey. That proved significant twice during his final round, starting on No. 8. He hit a tree with his drive and had to punch out to the fairway, leaving him 150 yards away with his third shot and his lead at two shots. But he stuffed it to 7 feet for par, then birdied the ninth to expand his lead to four.

Read the complete story at: PGATOUR.COM
Posted by Scott Stevens